It was 1979.  I was a law student at Adelaide University Law School & High Court Justice Lionel Murphy was ahead of his time.

His passionate dissent in McInnis v R (1979), a High Court case about the right to a fair trial in Australia, remains imprinted in my mind.

Justice Murphy upheld Mr. McInnis’ right to be represented by legal counsel.  Without it, his trial would not be fair.

MURPHY J. Every accused person has the right to a fair trial, a right which is not in the slightest diminished by the strength of the prosecution’s evidence and includes the right to counsel in all serious cases. This right should not depend on whether an accused can afford counsel. Where the kind of trial a person receives depends on the amount of money he or she has, there is no equal justice. (at p583) 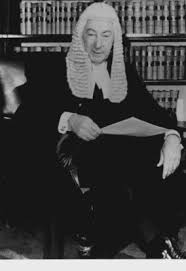 The case also showed that this was not an isolated instance.

The Crown Prosecutors told the Court that refusal of legal aid in serious cases like murder was “not exceptional“.

To that Justice Murphy responded, “the State systematically denies a basic human right“.

Being a student of law when this decision came down, I knew Justice Murphy’s dissent was important, even though I hadn’t set foot in a courtroom.

Back then, the practical in law schools was basically non-existent.

Everything came through books & case law & lectures & tutorials & assignments & exams & all that paper!

No computers.  No internet.

All those exams, examinations, examine, write, writ, writing … all of it. Hmph!

Oh so many cases, decisions & judgments as is the way of the common law, a system guided by the Latin phrase “stare decisis” (stare decisis et non quieta movere) which translates as to stand by decisions & not to disturb settled matters.

The common law is simply (nothing simple about it!) a stare decisis patchwork of judge-made law, of gathering past & previous decisions, the precedents, to try to make sense of the present facts.

As law students we read, read & re-read with never an end in sight!  I swear I sometimes felt like I was drowning in the stuff or morphing into a skeleton glued to the law library chair!

Back in 1979 there was no right to a fair trial in Australia.

There is no legal right now. You got it. Nothing has changed.

Australia lacked a rights jurisprudence then just as it does now.

There is no Bill of Rights in Australia.

And when there is intermittent talk, chatter & more talk & debate about a Bill of Rights it basically omits consideration of fair trial rights.

And when there is periodic angst, argument, shouting & fear-mongering about a Bill of Rights it basically omits consideration of fair trial rights.

In the end the talk fests & shouting matches all ring hollow & nothing happens. Repeat performances. What do we get?

No Bill of Rights.

I left 🇦🇺 Australia in the 1980s for the 🇺🇸 USA where I spent years in the criminal defence arena working with that country’s brilliant 200+ year experiment with due process called the Bill of Rights, especially the 4th, 5th, 6th & 8th Amendments.

An intimate understanding of these four Amendments is critical if you are working in the criminal defence arena in the USA.

I find it endlessly frustrating working in a jurisdiction where such protections are absent.

Back to McInnis:  The issue in McInnis was the right to counsel, to a lawyer, to due process & to a fair trial.

No right was found other than by Justice Murphy in dissent.

Since then, what the High Court has said is that while there is no right to a fair trial in Australia, there is a right not to be tried unfairly.

Got it?  Crystal clear isn’t it. No right to a fair trial, just a right not to be tried unfairly.

The central prescript of our criminal law is that no person shall be convicted of crime otherwise than after a fair trial according to law. A conviction cannot stand if irregularity or prejudicial occurrence has permeated or affected proceedings to an extent that the overall trial has been rendered unfair or has lost its character as a trial according to law. As a matter of ordinary language, it is customary to refer to compendious terms to an accused’s “right to fair trial”… Strictly speaking, however, there is no such directly enforceable “right” since no person has the right to insist upon being prosecuted or tried by the State. What is involved is more accurately expressed in negative terms as a right not to be tried unfairly or as an immunity against conviction otherwise than after a fair trial per Deane J in Jago v District Court (NSW) (1989) 168 CLR 23 at 56 – 57

*The emphasis in above quote is mine.

What this means is that while in Australia we say we have a right to a fair trial we in fact don’t.

There is not a constitutionally entrenched right to counsel, to a lawyer, in Australia. There is no legally enforceable right to a lawyer, to a fair trial, a speedy trial, to due process, which means there is no right at all.

We assert we have the right to a fair trial, when, in fact, there is no such right enshrined in any enforceable Bill or Charter or Covenant or Declaration or Statement of Rights in Australia.

Our system of justice here remains flawed while we do not have a Bill of Rights & rely on a principle of legality, on a legal ethic, a political or social morality, a human right. What ever it is, it is only a rule of construction that can be dismantled at any time.

The flaw means we have no enforceable right to a fair trial in Australia. We are not really protected from those in power.

Every person accused of a crime should have their guilt or innocence determined by a fair and effective legal process. But the right to a fair trial is not just about protecting suspects and defendants. It also makes societies safer and stronger. Without fair trials, trust in justice and in government collapses.

“crime paid but only a little at a time”