Some time ago, fossicking in a local Op Shop, a Charity Shop, I came across this small, rather unusual, rendition of Michelangelo’s Madonna & Child Jesus better known as the Madonna of Bruges.

It’s a little figurine standing at just about 15 1/2 cms (6 inches).  As in the original, Mary holds the scriptures in her right hand. It has no ID or notation so I don’t know who made it or where it came from.

It has blue felt on the bottom often found on commercially produced statuary/ormaments. I can’t tell if it was produced commercially, in a mould, in large numbers, or whether somebody, lovingly, hand crafted it. What do you think? 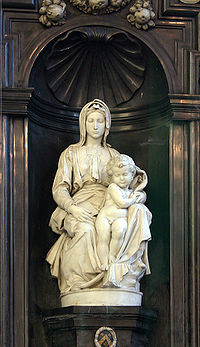 The Madonna of Bruges is a marble sculpture by Michelangelo of Mary with the Child Jesus.  The original full sized statue of 200cm/79″ (above) is in the Church of Notre Dame, Bruges in Belgium.

Michelangelo’s depiction of the Madonna and Child differs significantly from earlier representations of the same subject, which tended to feature a pious Virgin smiling down on an infant held in her arms. Instead, Jesus stands upright, almost unsupported, only loosely restrained by Mary’s left hand, and appears to be about to step away from his mother. Meanwhile, Mary does not cling to her son or even look at him, but gazes down and away. It is believed the work was originally intended for an altar piece. If this is so, then it would have been displayed facing slightly to the right and looking down. The early 16th Century sculpture also displays the High Renaissance Pyramid style frequently seen in the works of Leonardo da Vinci during the late 1400s.

But the fate of the statue took an unexpected twist during the French Revolution. In 1794, French revolutionaries seized control of then-Austrian controlled Bruges and took the statue with them to Paris.

It was only after the end of the Napoleonic era, in 1816, that the sculpture was returned to its original location. However, it did not remain there for long.

In 1944, the sculpture was taken by Nazi troops who were fleeing Bruges following the arrival of American troops in this part of Europe. Along with the statue, Nazis took other Renaissance-era paintings. The precious cargo was allegedly wrapped in a mattress and transported via a Red Cross truck over the border.

Eventually, the sculpture ended up in a salt mine of Altaussee, from which it was rescued in 1945 by Stephen Kovalyak, George Stout and Thomas Carr, who came to be known as “the Monuments Men,” a special team charged by president F.D. Roosevelt to rescue artworks stolen by the Nazis throughout Europe. The Madonna of Bruges was finally returned to Bruges, where it currently stands inside the Church of Our Lady of Bruges. Indeed, the church interior and the famous Michelangelo statue are featured in the 2014 movie The Monuments Men.

I believe it was actually this replica that featured in The Monuments Men. Check out this link for more on the story: Stuff About Things An Art History Pod Cast

The Getty image displays more of an angled view of the beautiful statue in the Church of Notre Dame, Bruges.

Here is a Masterpiece born of the deepest spiritual inspiration. The Madonna exudes a serene countenance and youthful beauty. The Bruges Madonna, as it is known today, followed Michelangelo’s Pietà in St. Peter’s Basilica by only five years.

In both of these important sculptures the Virgin Mary’s face is noticeably young and beautiful. However, the two works of art underscore different qualities. In the Pietà, Mary appears as a delicate maiden. In the Bruges Madonna she is portrayed with the dignity of the Queen of Heaven, seated upright as if enthroned.

The two figures face directly forward. According to ancient Christian iconography the Child is positioned in front of his mother’s womb in order to evoke her title as the Mater Dei, Mother of God. When the Madonna is enthroned on high tradition holds that she embodies the Seat of Wisdom, the Sede Sapientiae.

Now, this masterpiece has been recreated in cast from a authorized mold derived from the original. This sculpture is a cast of Michelangelo’s original marble statue in the Church of Our Lady, Bruges, Belgium.

On the rear base of the little statue are the words: ‘The Bruges Madonna’. Nothing else anywhere to identify it.

And no surprise to see the Madonna of Bruges also available as a garden statue e.g. at this site.

Considered by some scholars to be the most approachable Virgin Mary sculpture, this replica of Michelangelo’s elegant 15th-century sculpture embodies the High Renaissance. Our Design Toscano-exclusive 2½-foot-tall religious garden sculpture, cast in quality designer resin, captures the sweet Christ Child quietly ready to step into the grandeur of his mission. A classic religious garden statue, this enthroned Madonna creates a spiritual sanctuary nestled beneath your favorite tree or awarded a place of honor in a spot for indoor meditation. Another quality religious garden statue from Toscano! 10½”Wx12″Dx28″H. 15 lbs.

“crime paid but only a little at a time”