Always a lady learned in the law is Portia Mouseatticus-Finch Esq., up early this morning to dress & attire for court.

You see her dress code:  On her head she has bestowed the short ‘powdered’ wig. or peruke (from the French peruque) while her body is cloaked in the full flowing black gown or robe.  Attached to her neck is the jabot or white collar (also known as bands).

What is a jabot you ask? A jabot is partly from the French jabot: a bird’s crop.  The jabot is the white decorative neck piece or accessory, sometimes lacy or frilly, falling from or suspended from the collar (sometimes a stand up collar) at the throat. Portia wears a straight jabot, more the plain bands type.  The jabot is attached to the neckband or collar which Portia clips together at the back of her neck.

These days we use velcro to ‘clip’ the collar together.  This front part of the jabot evolved from the frilling or ruffles decorating the front of a shirt in the 18th & 19th centuries.  Not hard to find images of this kind of early dress. 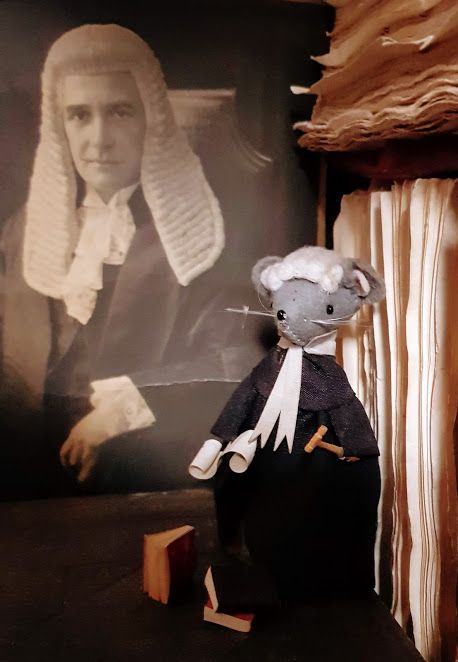 “May it please your Honour“ (or your Lordship or Worship depending on the court she is in) “I appear in this case with my learned friend . . . for the Prosecution“ says Portia.

This little lawya lady, Portia, is another miniature ornament, a hand-made wee lawyer doll, a tiny felt mouse standing at a mere 10 cm (4″).

I have had this little one for years now, a treasured gift from a good friend in Australia in the early 80s before I left Australia to live as an ex-pat in the USA for 17 years.

She’s quite fragile, a little battered, brown & spotty with age & wear but always a favourite.

Check out the long thin tail made of leather.

Indeed, as I was saying, Ms. Portia Mouseatticus-Finch emerged from the robing room fully dressed in the conventional garb of the legal profession in Australia.

She holds her tiny wooden gavel & her court documents, or parchment, while ‘The Law of Evidence’ & ‘The Criminal Code of Sth Australia’ the 2 most indispensable law books, are at her feet.

And look at those soft pink inner ears “all the better for hearing what is said, not said, and what is whispered in court“ she chuckles.

Portia became most learned in the law having buried her head in hundreds of legal cases, statutes & tomes for many years while at Law school.

She has spent her career overcoming tradition & prejudice as a woman practicing in the criminal courts where she advocates with passion & has acquired great oratory.

No surprise that with her refined feminine charm as well as her brains & ability, her eminently legal mind, she has become a savvy jurist well respected by her learned brother & sister barristers as well as the judges before whom she appears.  She is rarely briefless.

Indeed, looks like she’s getting into some classic pulp legal fiction these days including ‘The Defender’ by Frederick J. Thwaites.  I mean, how could she, or any lawyer, possibly go past this opening line featuring Thwaites’ characteristic tempestuous prose,

“Gentleman of the Jury, if God’s compassion can still be felt in this Court, you can’t convict this woman!”

Portia M-Finch’s traditional powdered wig with its stiff curls, is made using tiny rolls of cotton wool.  Closer view of her stand up collar & bands, the jabot.

Indeed, this lady lawyer is always immaculately dressed & coifed for court.  In fact she considers her court dress most attractive.

She has a boxed flat round base with tiny little pink feet attached.

At the end of 2019 we embarked on the purchase of a little ol’ village house in the Nouvelle-Aquitaine region in France.  We now own the little town-home we call ‘La Petite Maison des Avocats’.  And I assure you, most sincerely & most adamantly, it is not a grande maison, not a chateau & definitely NOT an ‘Escape to le Chateau’ :-)

The peculiarity of being a criminal law peddler in Australia is that one is an ant in a world full of spiders providing the best representation money can’t buy. Like Rumpole said, “crime paid but only a little at a time.”

This Belle Femme is a Boudoir Doll

SOME SITES I ENJOY